The episode documents the transformation of a typical suburban garage into a man cave that would make any father proud. Complete with a pool table, underground motorcycle lift, flat screen television, RaceDeck floor and a new Victory motorcycle the ultimate man cave was accomplished.

The install included RaceDeck Diamond and RaceDeck XL tiles which both have a high-tech, diamond plate pattern for a contemporary look and added traction. They are a very popular alternative to traditional epoxy or paint solutions.

Jeremiah Shapiro, RaceDeck’s representative at the shoot, said the installation took about four hours and added “It’s amazing to see what the Man Cave producers came up with for this makeover, the underground motorcycle lift was amazing! We’re always happy when our products are a part of such creative projects.”

The events have grown significantly from years past and continue to gain momentum each year.

The AAU is one of the largest non-profit volunteer sports organizations in the United States. A multi-sport organization, the AAU dedicates itself exclusively to the promotion and development of amateur sports and physical fitness programs. Players at the Reno Memorial Day Tournament consisted of over 630 teams of boys and girls, ages eight to seventeen. These players competed in more than 1,350 basketball games during last weekend’s event.

“I could not believe the overwhelming energy and the high spirited atmosphere of the event this year. It was evident that every player, every coach, as well as the parents were all very much a part of this excitement. SnapSports was thrilled to have contributed to the energy as well as be a part of what was the largest basketball tournament in the world!” says Dan Wollman, SnapSports Vice President of Sales.

“SnapSports flooring is awesome! The players love it. The bounce they have from jumping, the ball handling… is second to none,” says Matt Williams, AAU President of the Pacific Region and Tournament Director.

The high-gloss, metallic looks of RaceDeck TuffShield and RaceDeck Pro matched the theme of this week’s “Video Game Garage” remodel. If you’re a gamer, see some drool-worthy pictures at the DIY Network website and watch a short clip of the episode on our About Us page.

The 42nd USA Team Handball Championship, being held May 21-23 in Las Vegas, Nevada will feature thousands of handball athletes competing in the Men’s Elite, Men’s Open and Women’s Elite divisions.

“As always, it’s exciting when our products are involved in such a high profile event. We’re proud of the fact USA Team Handball keeps coming back to us. We think it says a lot about our products,” says Jorgen Moller, CEO of SnapSports, Inc.

Salt Lake City (MMD Newswire) May 7, 2010 — Hip-hop legend and automotive devote, Funkmaster Flex, overhauled a Ford Fiesta on last Sunday’s premiere episode of the MTV2 series, Funkmaster Flex Full Throttle. The show is a mix of custom auto makeovers and interviews with the likes of Ludacris and Diddy.

Producers of the show contacted RaceDeck because of its reputation and quality. Over 1,500 square feet of red and black RaceDeck Diamond flooring was used to outfit the New York garage where the show is filmed.

Jorgen Moller, CEO of SnapLock Industries, maker of RaceDeck said, “We’re always flattered when RaceDeck is used in renowned garages. RaceDeck Diamond is tough enough for the pros, but looks good enough to be on TV!”

The event, to be held April 23-25 in Myrtle Beach, South Carolina, will feature the top men’s and women’s Team Handball collegiate teams.

An Olympic sport, team handball is played by teams of seven athletes each charged with scoring goals against their opponents in a 60 minute, high-paced, game which at times resembles soccer, basketball, and hockey. 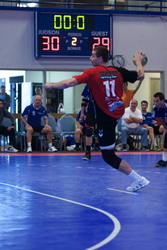 SnapSports is the official flooring provider for USA Team Handball and tournament games are generally played on the company’s BounceBack ShockTower surfacing.

“As always, it’s exciting when our products are involved in such a high profile event. USA Team Handball could choose any equipment provider in the world, and we’re proud they keep coming back to us. We think it says a lot about our products.” – Jorgen Moller, CEO of SnapSports.

This year’s tournament will see the West Point Black men’s team in contention to win their fourth straight national championship and the reigning women’s champions, the Carolina THC, in their first attempt to defend theirs.

Boys and girls from 32 teams will compete this weekend at the Grand Sierra Hotel for the Reno Spring Jam. Jam On It Basketball Academy hosts the event and features amateur basketballers from first through twelfth grade. 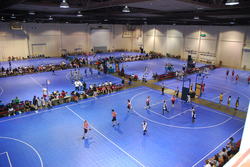 Tournament games will be played on SnapSports’ BounceBack surface, a high-impact polymer designed to be safer and better-performing than traditional wood floors. Three courts, each 92′ by 56′ will be used in the tournament. Reno Spring Jam games will be March 27th-28th at the Grand Sierra Hotel and Resort, 2500 East Second Street in Reno.

“We’re proud that the AAU has chosen to use our SnapSports BounceBack surfacing for their tournaments. Player and coach feedback has been tremendous,” said Jorgen Moller – CEO SnapSports.

BounceBack is the only modular sports surface that offers ‘patented’ performance and safety features such as the ShockLock™, ReActivePlay™, and a Dual Suspension Understructure which help reduce injury to players and provide the highest level of performance. SnapSports is a FIBA Associate Manufacturer for the Indoor BounceBack basketball surface.

The AAU is one of the largest non-profit volunteer sports organizations in the United States. A multi-sport organization, the AAU is dedicated exclusively to the promotion and development of amateur sports and physical fitness programs.

SnapSports, the world’s leading manufacturer and provider of outdoor multi-courts and sports surfacing, continues their association with the United States Futsal Federation as the exclusive and official flooring of the USFF.

The agreement was signed at the FUTSAL national championships this year where SnapSports provided over 100,000 square feet of athletic surfacing. 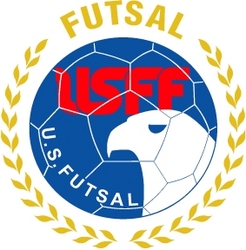 “We are proud to have been chosen as the only approved surface worthy of Futsal competition by the USFF,” says Jorgen Moller – CEO of SnapSports.
Futsal players from around the world will continue to compete on surfaces, specially designed by SnapSports, which will protect them from injury while providing the speed and response the game requires.

Futsal is a five-a-side version of soccer which is played on basketball-sized courts. The sport traces its roots to the 1930s and is today played worldwide. Futsal is currently experiencing explosive growth in the US. The US Youth Soccer Association (USYSA) and US Futsal signed an agreement in August of 1995 to promote Futsal in all National State Associations as their game of choice for indoor soccer. Many American soccer coaches use Futsal to train athletes, especially in the off-season.

Asked why they switched from their previous modular surface provider, Alex Para, CEO of the US Futsal Federation, said “We wanted to work with SnapSports because of the quality of their designs and because their floors are easy to install. Futsal demands a lot and SnapSports provides it, plain and simple.”

SnapSports today announced the release of the ReActive line of sports flooring. The primary advantage of the new system is its adherence to metric standards, while still utilizing all of the patented performance technology found in the original SnapSports’ athletic surfaces.

The ReActive sports surface stands 190mm high and incorporates a shock absorbing system for cushion, rebound, and player safety. Made of high impact copolymer to resist moisture and humidity, versatile for many different sports and low annual maintenance make this the ideal choice for a multitude of athletes. Solid-topped indoor and grid-topped outdoor versions are available, each with 24 PowerLock™ connections per module. ReActive is the only product that features all of these design components together in a metric design, offering superior performance at every level of play.

The surface is aimed at the international sports market and is positioned for basketball, tennis, handball, inline hockey, FUTSAL® and many other team sports. SnapSports is a FIBA Associate Manufacturer, the world governing body of basketball.

“ReActive is engineered to be a high-performance multi-sports surface for the highest levels of international competition. It is a great addition to our leading line of innovative performance products” says Jorgen Moller – CEO SnapSports.

Over two hundred teams will compete in the Southwest and Northeast Regional Futsal tournaments this weekend, with SnapSports providing championship athletic surfaces for the event.

SnapSports is the exclusive official sports flooring provider for the United States Futsal Federation. SnapSports representatives will install more than 16 official indoor championship courts for the Regional Futsal Tournaments in Los Angeles, California and York, Pennsylvania. The courts will vary in size from 54 x 90 ft to 90 x 130 ft.

“We are stoked to provide our top-of-the-line Indoor BounceBack ShockTower surfaces for the regional & national championships this year. Our relationship with the USFF has grown into a great partnership over the past two years and we don’t see things slowing down any time soon,” said Dan Wollman of SnapSports.

Each tournament will feature top athletes from several states, and crowds are expected to reach numbers in the tens of thousands.

The USSF is the national governing body for Futsal in the USA. Futsal is the only form of indoor soccer approved by the Federation Internationale De Football Association (FIFA). An estimated 12 million players from 100 countries and all continents play Futsal.